Continuing my series of Unstable posts, today I'd like to introduce you to one (...or three?) of the friends I made while working on Unstable. I was asked to illustrate the never before seen Three-Headed Goblin, but to do so I knew I would have to find some authentic reference material! Thankfully, I knew one worked just a few blocks away at the local scrapyard.


He stood tall and intimidating as I watched him bash piles of junk over and over and over with his giant wrench. I approached stealthily, not wanting to alarm him and end up amongst the debris. Without blowing my cover, I was able to make a couple of rough sketches of the goblin. 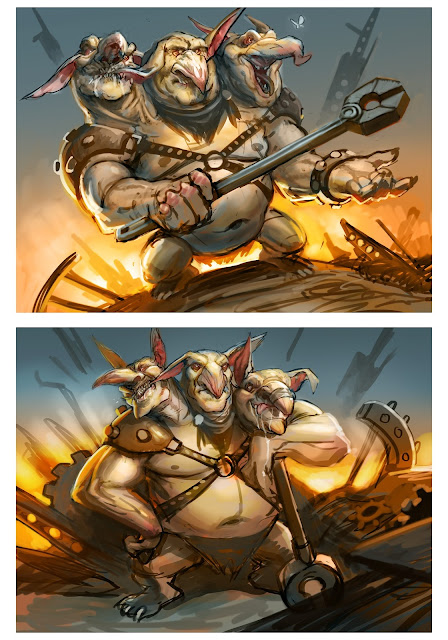 I was feeling pretty good about the sketches, but that feeling fled me when I noticed a shadow looming over me. I looked up from my drawing tools and saw them… those three green faces.

The center head focused on me with a dead-eyed stare while the head to my left snarled violently. The head to my right appeared to be harmlessly blowing snot bubbles.

The massive creature snatched up my drawings as I was frozen with fear. Not brave enough to run, I could only wait for their response. Lefty and Righty were examining my sketches, but the head in center never took his eyes off of me the entire encounter.

Lefty grunted and groaned as he chewed up and spit out one of my sketches.


Righty seemed oddly excited by the other sketch and giggled to himself a bit.

The center head continued it's stare (I can't remember his eyes ever blinking) and they roughly handed the remaining sketch back to me. I knew I needed to leave before one of them ate my other sketch, so I slowly turned away from them and bolted towards safety. It was time to go home and work on the final illustration.

The first thing I did was create a refined drawing based on the sketch. I would then scan that drawing back into the computer and use it as a map for the final painting. 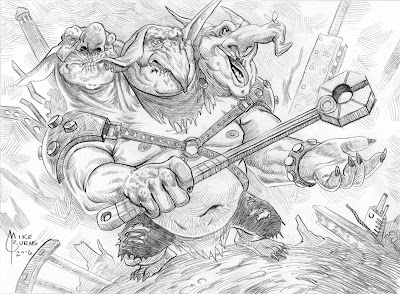 After that, it was time to start laying down the digital colors and paint paint paint. 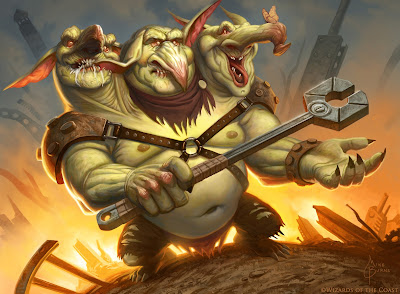 Upon finishing the image, I felt courageous enough to venture back to the scrapyard, and wanted to track down the goblin (goblins??) and show them my result. I waved to get their attention and then eagerly approached them, presenting what I made. All 3 heads confusingly looked at each other as if coming to the agreement, "this guy knows we could totally crush him right?", but they decided to humor me and peer down at the picture.

In unison, their eyes went wide and they each looked up at me. I nervously lowered the picture, just now remembering their fondness for giant wrenches. And smashing things with said wrenches. They took a single step forward, their wrench firmly gripped.

"Well, I guess I deserve this for thinking it was a good idea", I thought to myself. I closed my eyes and braced myself for certain doom. 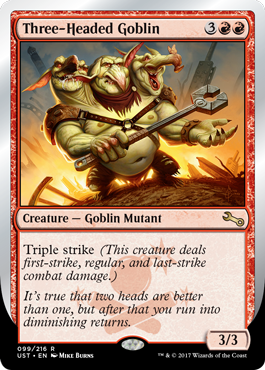 I slowly opened my eyes and was immediately hoisted into the air then squeezed against their blubbery body. Was this...a hug? I found myself encased in smiles, slobber, and glee.

After some hopping about, I was safely placed back on the ground. I felt a wave of relief, and was happy that they liked my art and, more importantly, hadn’t crushed me to death death...either by wrench or by hug. We all shared a four-headed laugh and I gave them the picture as a souvenir. We parted ways, but before I could leave, silly ol' Righty handed me his own picture and said, "This I make! This for you!"


Touched by the generosity, I happily accepted the trade and returned to my normal life as an artist.

Swing by next time for more un-stories!

*Goblin's Drawing by my niece, Gabriella 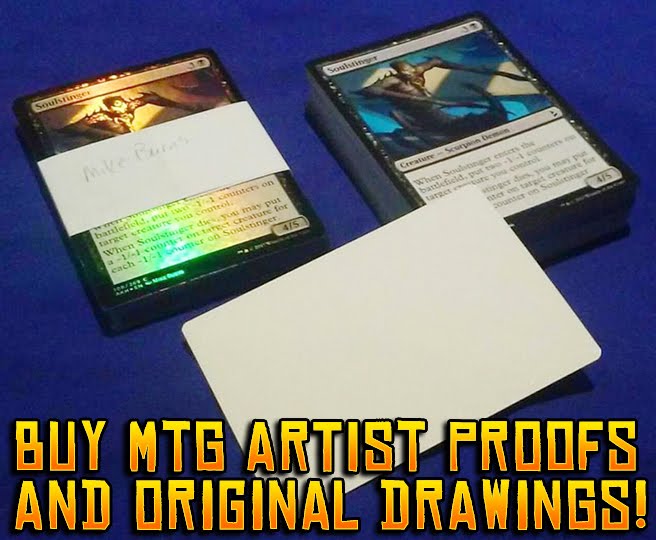